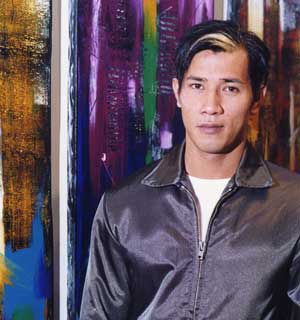 Panuwat Hoonbamrung was born in 1972 in Samut Prakarn, Thailand. Panuwat or “Neung” as he is fondly called, was popular during elementary school for his ability to draw cartoon characters. He went on to study art and design at Chang Sin College of Fine Art, then a further three years at Rajamongkol Institute of Technology, graduating in 1994. Throughout his studies, Neung entered and won several national art competitions. Having completed his studies, Neung became involved in many commercial projects in Thailand, India and Bali. Furniture design, glass blowing, sculpture, costume design, ceramics, body painting, and product design are just some of the different avenues to which Neung has applied his creative talents. Neung has been involved in product design for several European retailers, and has designed costumes for the Madana Opera in Bangkok.

“I feel that I can do no wrong act when I create art; indeed, all art makes a positive contribution as it makes a connection with someone, somewhere”, Neung explains. Through his use of bold, primary colours and sometimes provocative subject matter, Neung says that his aim is to realise his visions, while producing works for people to share and enjoy.

Sadly, Neung passed away on January 5, 2011 due to a heart condition. The artwork that you see in this website is what remains from two exhibitions that were curated by Norm Yip.